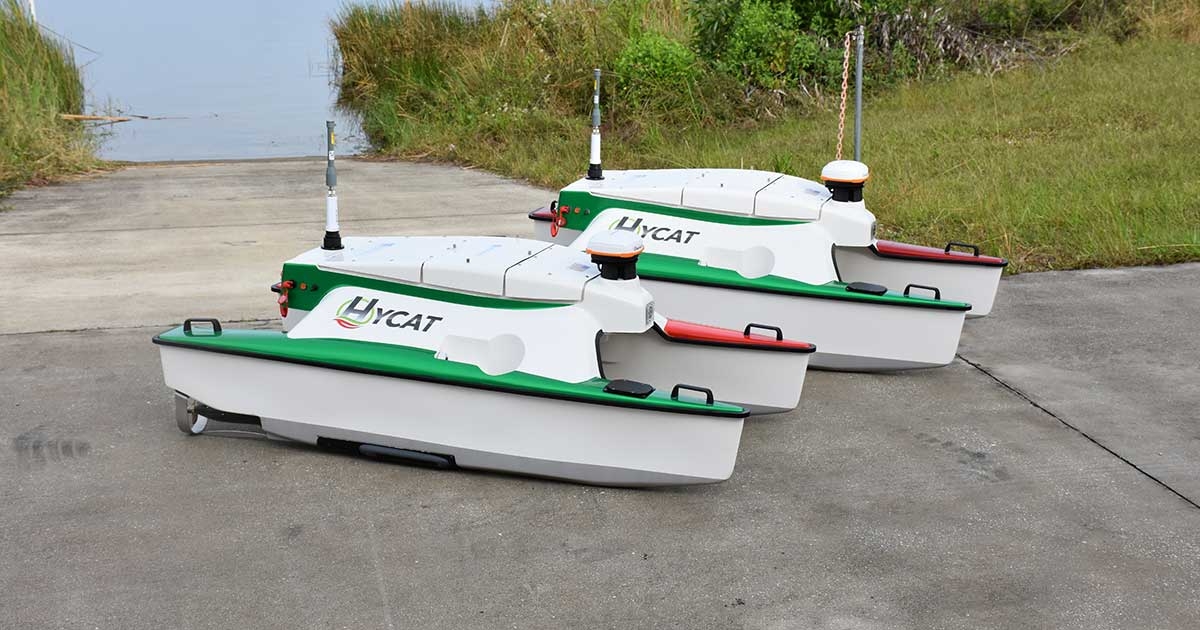 SeaRobotics Corporation (SeaRobotics) today announced that it has completed the first production run of the HYCAT Autonomous Surface Vehicle (ASV) in partnership with Xylem, USA. This unique ASV, offered by both Xylem and SeaRobotics, provides exceptional tools leading to an out of the box plug and play survey solution. HYCAT’s small portable form factor and shallow draft allow deployment in the most challenging environments with minimal support.

“SeaRobotics is excited about the completion of HYCAT’s first production run and its partnership with Xylem and its broad range of sensor and software support companies,” stated Don Darling, president of SeaRobotics Corporation.

“We funneled 18 years of multidisciplinary ASV design & development experience into HYCAT. The end result is a leap forward for this technology and the hydrographic survey industry. Our goal was to set the bar for safe, intuitive, autonomous survey systems. We did that with HYCAT. This is a product we and our strategic partners Xylem YSI, SonTek, & HYPACK are proud to offer,” further explained Geoff Douglass, ASV development manager at SeaRobotics.

HYCAT is equipped with a full complement of hydrographic sensors including the SonTek M9, YSI EXO2 Multiparameter Sonde, Hemisphere AtlasLink RTK GNSS, HYPACK Max onboard data acquisition and processing software, an onboard Windows 10 Data Acquisition Computer, as well as an Imagenex Side Scan Sonar system. A single consolidated software interface has been developed by SeaRobotics and HYPACK making this small ASV the most fully integrated ASV on the market.

Since its launch, HYCAT has been demonstrated at numerous trade shows and demonstrations, as well as completing a variety of commercial surveys. HYCAT performed a pipeline survey in international waters providing bathymetric data, side scan sonar data, and water column velocity studies in a high current environment. Other surveys utilized the side scan sonar for search and rescue and the EXO2 sonde for sediment transport. In addition, EXO2 sensors were utilized for water quality studies. For additional information about the HYCAT visit here.

SeaRobotics Corporation, headquartered in Stuart, Florida, specializes in smart survey vehicles that are manned/unmanned and autonomously operated. Its clients include major military and commercial organizations, both U.S. and foreign. SeaRobotics’ seasoned marine survey software interfaces with most data acquisition hardware, software and sensing systems to produce multi-spectral, geo-referenced data for survey, research or surveillance efforts. Applications for SeaRobotics vehicles range from bathymetric and hydrographic surveys to coastal, harbor, and riverine surveillance. Many SeaRobotics vessels are small, modular and man-portable, allowing rapid deployment in remote areas or deployment by larger vessels; their command and control systems are user-friendly and compact allowing for safe, efficient surveying.