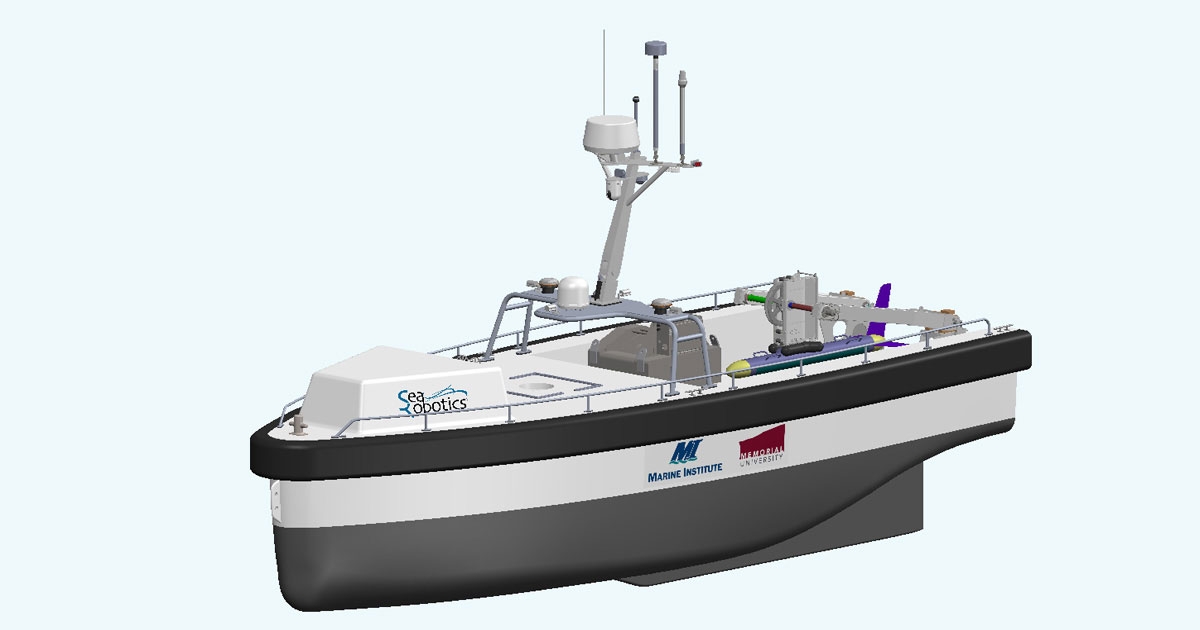 SeaRobotics Corporation (SeaRobotics), a leading developer of marine robotics and autonomous systems, has announced the development of a new multi-mission autonomous surface vessel (ASV) in partnership with The Fisheries and Marine Institute of Memorial University of Newfoundland (Marine Institute). The SR-Endurance 8.0, the latest model from SeaRobotics’ Endurance Class of ASVs, was designed to enhance the Marine Institute’s training and research program in ocean mapping, observation and characterization.

The eight-meter, self-righting ASV features a hybrid diesel-electric propulsion system (allowing for a quieter operating mode needed for acoustic research), collision avoidance technology, GPS navigation, and customizable levels of autonomy based on the mission at hand. Autonomy levels range from remote control (no intelligence/operator in the loop), basic (minimal intelligence), mature (crewed oversight), and advanced autonomy (operator out of the loop/full automatic mission implementation). While in the field, the Marine Institute will track and monitor the ASV from a shore-based command center as it continuously collects ocean data during its non-stop 14-day missions.

The ruggedized ASV is equipped to handle a wide range of payloads and can be outfitted with a variety of interchangeable sensors and sonars, including a multibeam echo sounder for 3D seafloor mapping. The SR-Endurance 8.0 is rated for operations in waves up to four meters high and Beaufort wind scale seven (near gale-force winds).

“We are delighted to partner with the Marine Institute’s School of Ocean Technology in the development of this uniquely capable ASV for ocean research and education,” said SeaRobotics president Don Darling. “We consider intelligent, versatile and dependable ASVs like the SR-Endurance 8.0 as instrumental to both the advancement of essential ocean research and the future of crewless marine operations.”

Speaking of the announcement, Paul Brett, head of the Marine Institute’s School of Ocean Technology, said:

“This compact and efficient ASV represents the next generation of technology needed to change the way we map and characterize the planet’s oceans. Not only will the SR-Endurance 8.0 expand our capabilities in Atlantic Canada, but it will also provide students and researchers alike with the enviable opportunity to work with truly cutting-edge autonomous platforms.”

Delivery of the SR-Endurance 8.0 is expected in the spring of 2022.