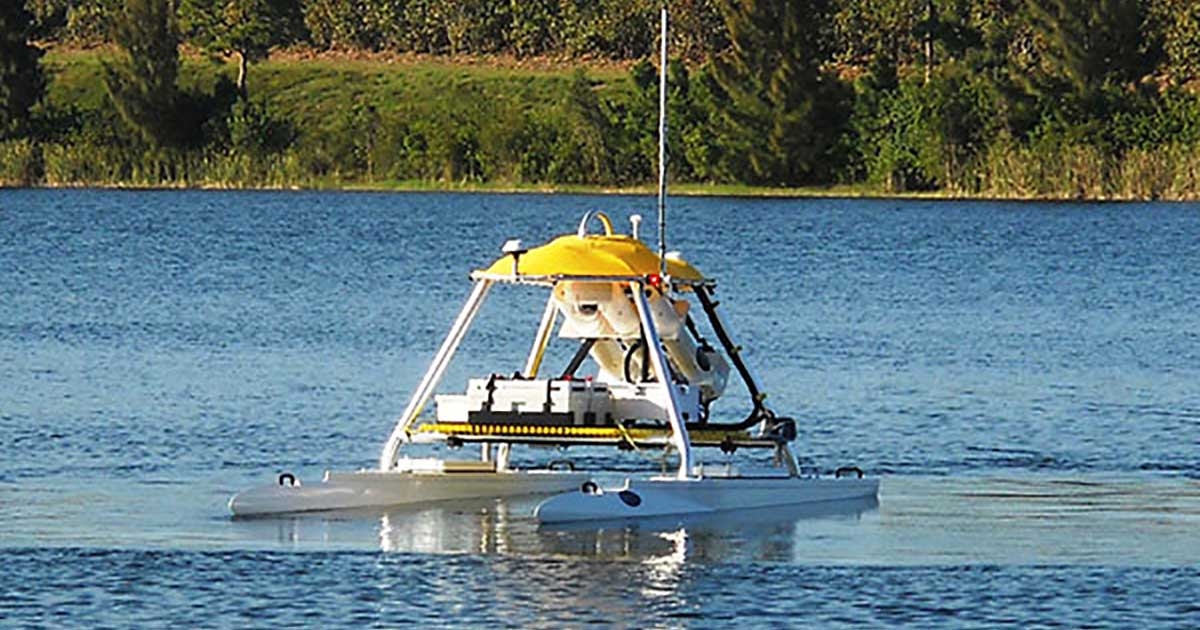 USVs Find Use In Shallow-Deepwater Applications

Developments in unmanned systems technology, data telemetry systems, remote sensing and automation have provided a new set of tools for inland and offshore tasks, including survey, intervention, inspection and monitoring. Unmanned surface vehicles (USVs) can be applied to shallow- and deepwater operations.

These USVs utilize DC battery systems, AC/DC generator sets, renewable power sources or a combination of several energy sources. Communication with the USV is achieved by means of line of sight using a wireless telemetry system or high-bandwidth satellite networks that allow for extended endurance, long-range remote operation and operations from nearshore to far offshore.

When combined with other robotic devices and sensor payloads, USVs can operate 24/7 and minimize costs of inland, coastal and offshore tasks through the reduction of day rates and involvement of fewer personnel, as compared to vessel work.

USVs utilize standard commercial off-the-shelf (COTS) sensor suites that can be easily integrated. With the USV’s large deck areas, power availability and communication bandwidth, payload integration can be as simple as plugging into the appropriate “user ports” and securing the payload. Some of the sensors integrated include forward-looking and down-looking multibeam sonars, scanning sonars, single-beam echosounders, magnetometers, sub-bottom profilers, side scan sonars and pipeline pulse induction survey systems, as well as sampling systems and sensors used to detect obstructions and hazards to navigation. Many COTS sensor suites can be integrated during the design process or by the end user’s reconfiguration of the payload deck to satisfy mission objectives.

The USV-2600 performed successfully due to its ability to station keep for extended periods within 1 meter of the desired location. The study used a station-keeping period of 10 minutes, but post-processing with Kalman algorithms indicated a four-minute dwell would have been sufficient.

The operation concluded that the USV’s ability to precisely hold station in both time and space exceeded the ability of humans, showing it could effectively study parameters associated with the riverine flow environment.

The National Institute of Ocean Technology of India began conducting a survey in December 2011 with a USV-2600 to map current flows and acquire water quality data in the Gulf of Khambhat in northwest India. The gulf experiences 10-meter tidal swings with tidal currents ranging to 8 knots.

Using a Teledyne RDI 1,200-kilohertz ADCP and a YSI Inc. (Yellow Springs, Ohio) multifunction sensor, the USV continues to map water currents in the gulf during full tide cycles. The USV is outfitted with a 4-kilowatt, water-cooled, electric-start DC generator designed by SeaRobotics.

Survey tasks requiring hull-mounted bathymetric and side scan surveys, as well as those requiring towed sensor platforms, have been performed with similar USVs.

The autonomous mine neutralization system developed for NATO’s Undersea Research Centre that is built around the USV-2600.

USVs are starting to play a significant role in autonomous and supervised MCM and unexploded ordnance (UXO) mitigation operations.

In all but the most covert MCM operations, USVs provide large, reconfigurable payloads, long endurance and high-bandwidth communications in both shallow and deep water.

Along with traditional shallow-water sites, recreational diving creates new challenges as diving is reaching greater depths. Installation of fiber-optic cables and pipelines is also on the rise, making previously irrelevant UXO dump sites a concern. Operations using USVs with hull-mounted or towed magnetometers are being used to map large shallow-water sites with potential UXOs while keeping operators and personnel out of harm’s way.

Since 2009, the Naval Surface Weapons Center in Panama City, Florida, has been using a USV-2600 with an integrated SeaBotix LBV100 ROV and associated launch and recovery system for MCM and UXO operations.

High-bandwidth communications allow for the operation of the ROV from a safe distance when deployed from a USV. Using autonomous waypoint navigation, also developed by SeaRobotics, and precision station keeping, the USV transits to the intended site, deploys the ROV and allows visual inspection by an operator located at a safe distance with minimal human supervision. This is crucial for inspecting potential UXOs found during a typical survey.

Once located, mines and UXOs must be effectively neutralized. NATO’s Undersea Research Centre in La Spezia, Italy, has developed an autonomous mine neutralization system built around the USV-2600. This system incorporates a VideoRay (Phoenixville, Pennsylvania) ROV, batteries, acoustic modem, BlueView Technologies Inc. (Seattle, Washington) imaging sonar, a neutralization charge and high-level autonomy software. The VideoRay ROV, turned AUV, was modified by removing its tether and adding an acoustic modem and battery. The VideoRay AUV is launched from the USV and guided to the site of the mine by utilizing feedback from the BlueView imaging sonar mounted on an elevator assembly on the USV.

With the sonar deployed below the hulls, the acoustic imagery is processed to locate the VideoRay AUV carrying the neutralization charge and the mine, and provide corrective navigation feedback to the AUV through the acoustic modem, guiding it to the mine without human supervision.

SeaRobotics’ box coring system was deployed in November at a depth of 1,700 meters in the Eastern Mediterranean, performing infaunal and sediment sampling on a traditional work-class ROV deployment for CSA International.

A storage rack assembly and three box coring systems were integrated and deployed with the ROV’s manipulator. Sampling was performed using imagery from onboard cameras and position feedback at operator-selected locations.

New applications and areas of operation are emerging for USVs.

Marine Construction. Large subsea construction vessels require the placement of deepwater long baseline array beacons for accurately positioning construction assets. A considerable amount of time is spent by the vessel crew and the onboard surveyors to calibrate each of the long-baseline beacons in the array field.

A USV deployed with a transceiver and data telemetry link to the construction vessel could autonomously perform the box-in acoustic calibrations from the surface while the expensive construction vessel works on other subsea operations or prepares for recoveries and deployments. SeaRobotics is now working with a marine construction support and survey company to validate this process.

Opportunities are emerging in various regions of the world, with renewed interest in the Arctic leading the way. As navigation through previously inaccessible waters becomes possible due to the rapid disappearance of multiyear sea ice, investigation of this region must proceed quickly. Improvements to nautical charts, tide and current studies, and bathymetric surveys are required to better understand and provide safe navigation in these inhospitable territories.

A USV-2600, configured for Arctic operations near the magnetic north pole, completed in August its first Arctic missions. The demonstration was conducted for the Canadian defense community using AN/SSQ-553G sonobuoys, manufactured by Ultra Electronics (Dartmouth, Canada).

Configured and outfitted at the factory for sonobuoy launch, the system was immediately transported to the Arctic for operations. After successful demonstration of its intended sonobuoy launch mission, the USV payload was reconfigured by the end user for subsea profiling. The sonobuoy launch system, capable of launching three A-size sonobuoys, was removed in the field and replaced with a profiling sonar system.

With generous deck space and the connectors provided for user functions, the system was reconfigured in the field by the user, requiring no support from the factory. Arctic operations were supported using GPS-based heading inputs, allowing for accurate waypoint navigation and station keeping in the far North.

When faced with more challenging sea states and endurance requirements in the Arctic and elsewhere, larger catamarans could provide an alternative to manned system operations.

SeaRobotics delivered in October the Surveying Coastal Ocean Autonomous Profiler (SCOAP), an 11-meter catamaran USV with a 6-meter beam and a payload capacity of approximately 1,000 kilograms, to the University of Rhode Island. It will perform current profiling studies, water quality sampling and other hydrographic and oceanographic survey missions.

SCOAP is intended to be deployed for 30-day missions, operating at 5 knots off the coast of Rhode Island. SCOAP is the first USV in this hull series. It utilizes 400 gallons of diesel fuel and a diesel generator-based hybrid propulsion system.

The USV is capable of deploying multibeam sonar systems and medium-size ROVs or performing casts with various water and oceanographic data sampling systems. ROVs and an assortment of data sampling systems are used to inspect and monitor various subsea structures, features, construction sites and the surrounding seafloor.

At a time when budgetary challenges are increasing and ocean data gathering is on the rise, substantial cost savings can be realized with USV-supported ROV and data sampling operations. Numerous sensors have been cast from the referenced USVs, including RBR Ltd. (Kanata, Canada) and YSI multifunction gauges, WetLabs transmissometers, various acoustic and optical backscatter sensors, fluorometers and mass spectrometers.

The USV is finding its way out of the laboratory and research institutions into cost-effective performance of real-world tasks. USV-based operations can deploy a range of instruments and offer the potential for cost reductions in many surveys.

Utilizing USVs to improve survey coverage and geophysical data gathering, as well as for the operations described above, will ensure a rapidly expanding workload for USVs in the years to come.